the beating heart of smithfield since 2001 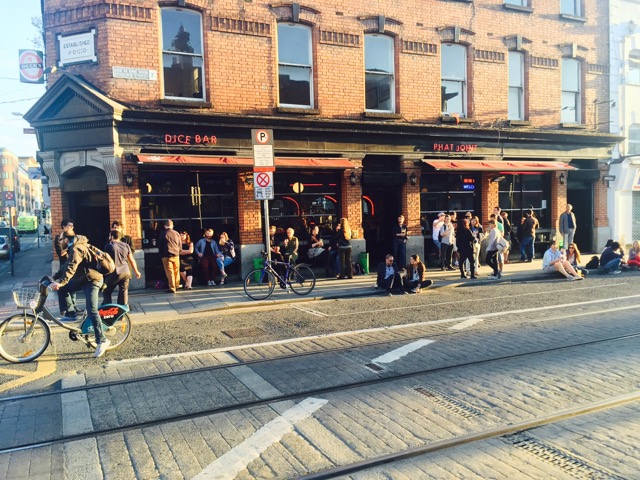 Dice Bar is located on the corner of Benburb Street and Queen Street, which is just off Smithfield Square on the Luas Red Line. We've been watching over this corner since 3rd of May 2001, the night before the Buena Vista Social Club gig in Smithfield Square.  Although there has been a bar here since 1770, when Dublin was the second biggest city in the empire. On Bow Street we had John Jameson Whiskey, across the river on Victoria Quay, Arthur Guinness was brewing stout.. Great staff, great music and great beer make for a real bar experience. We also brew our own, Revolution Dublin Beer  and Augustine Steam Lager. Plus we have a great range of Irish Whiskey and interesting Caribbean Rums.

We have a new bar The Mission Bar, Dice Bar's Li'L Sister on the corner of Ellis St/Ellis Quay. A completely different looking bar but when you walk in, its that same warm fuzzy feeling you've been used to here at Dice Bar. it's on the north quays just opposite the new Guinness Brew House on Victoria Quay.

The Mission Bar trading hours are:

I setup the Dublin Brewing Company 20 years ago in 1996. However in 2003 regretfully I departed the brewing business. Fortunately back in 2009 with the renewed interest in  craft breweries (Brian Cowan Tax Break of 2006) I had an opportunity to start brewing some beers with Trouble Brewing in Kildare. Never having brewed a beer in my life , but having spent seven years running a 60 HL brewery. I got two retired brewers from the DBC, so we went down to Kildare with our own malt, hops yeast and brewed some new beers, Currently Revolution Dublin Beer is only available on draught at the Dice Bar and The Mission Bar.